Denver Real Estate Market Update May 2022!
Michael Kozlowski #1 Individual RE/MAX Agent in the State of Colorado! Selling homes in 2022 up to $250,000 Over Asking Price! Check us out at: www.team-koz.com
It’s Springtime in the Rockies, and we finally have New Inventory worth noting in the Denver Metro Area!
- Active Listings at the end of April were at 3,204, which is 44% higher than March!
- New Listings came in at 6,881, which is 14% higher than March.
- Pending Homes in April were up 16% over March
- Closed homes were up 3% from the month before.
Keep in mind that our Closed data from April actually represents the state of the market 30-60 days prior with much lower Inventory and much lower Mortgage Interest rates. That data is evident in the Average Price of a Single Family Home closing at $825,000 and Condos/Townhomes at $495,000 in April!
However, the market seems to be showing signs of a shift as the increased inventory and rising Mortgage rates are slowing down the velocity of bidding wars in most price ranges and showings decreased per Listing in April. The suburbs seem to be feeling the cooling off in the $600,000 to $700,000 price range, as Showings have decreased.
The Luxury Market has not been as affected by rising interest rates, as many of the high end homes throughout the Metro area are still selling above their asking price with bidding wars!
The good news for Buyers is that any slowdown caused by higher mortgage rates should make the market a little easier for our patient buyers, however we may see signs of a mortgage trap as many homeowners may think twice about moving to get into their next home because of their current low interest rate. This can also create less inventory and more pressure on pricing.
For Sellers, this is still an amazing time to sell your home as the Buyer Demand is still very active and anxious to lock in their interest rates as soon as possible.
You will want to act sooner than later if you need to sell your home. 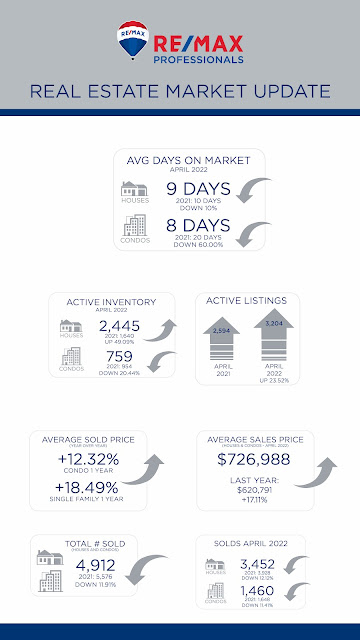 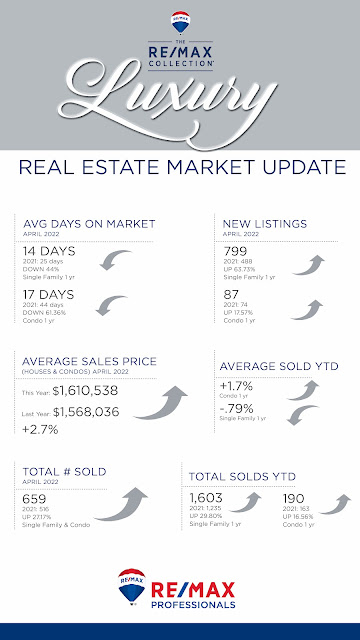 Posted by Team Koz Denver Real Estate at 8:24 AM No comments: